When I was at the Alabama Chanin Factory in November 2016 for a weekend workshop I bit the bullet and bought a faded polka dot pencil skirt.  Another woman in our group had bought it the first day and wore it the second. Seeing how she styled it I realized how versatile the piece could be. Sometimes you just have to try it on or see something on someone else to recognize the beauty. Anyway, being able to buy it at a 20% discount since I was there for the workshop was just what I needed to convince me. It was still expensive, but totally worth it.

Since I’ve had the skirt I have become intrigued by the “Wet-Paint Stenciling Technique” which was used to create the pattern.  Here are directions for the technique, and they can also be found in Alabama Studio Style. Basically it involves soaking the fabric before painting and spraying the paint with water once it is applied.

Alabama Chanin used the faded polka dot fabric in their Design Bundle Quarter 2 which includes a lot of the colors I already have in my “collection”. Black, Peacock and Ochre so it seemed like a natural fit.

The more I wore the skirt, the more I realized I really liked the technique and when Alabama Chanin was selling a scrap bundle of it for $30 during their sale last November, I bought it.

I envisioned making myself a corset. 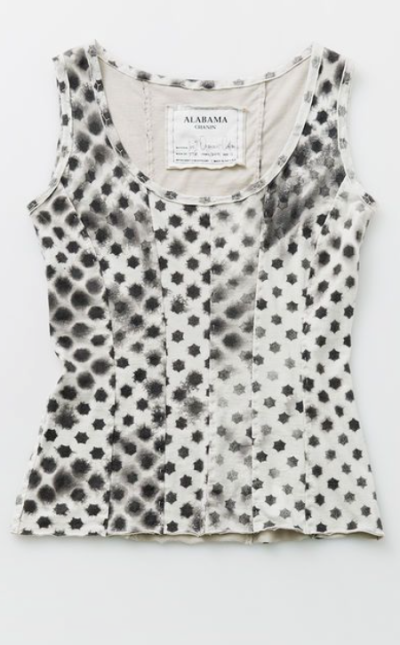 But when I got the bundle it looked more like this

Here it is laid out. You can see the shapes of the pieces. **Disclaimer: I had already cut about 5″ off the skinny end of the odd shaped medium dot for project #1.**

The two larger pieces of scrap were not made using the small polka dot stencil, but the medium.  Hmm.  That made me rethink the whole idea of what I was going to make with the fabric.  It was time to get inspired so I turned to both Natalie’s Studio Style book where the technique was introduced and to my Pinterest. I decided to try three things:

#1) Turns out some of my all time favorite pieces from Alabama Chanin are from her 2008/2009 collection called Revolution and that collection utilized a lot of the techniques Natalie wrote about in Studio Style in 2010.

This jacket is spectacular, no?

I started to play around with the small squares technique and I thought it looked really cool and was relatively simple.  I just cut a bunch of squares with my rotary cutter and sewed them on straight down a line.  The hardest part was trying to get them all even, and how to hold them in place while I stitch them on.  But first, there was no way I could commit to a whole jacket for my first attempt so I decided to use the small square technique on the cuff’s of a long-sleeved bolero.

First I made sure I liked the look.  I did a first attempt on a 4×4 square to see what I was up against 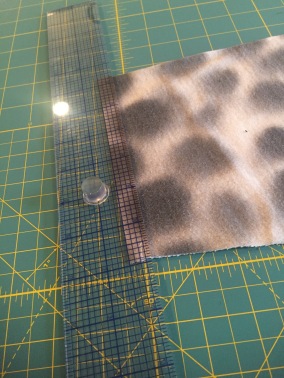 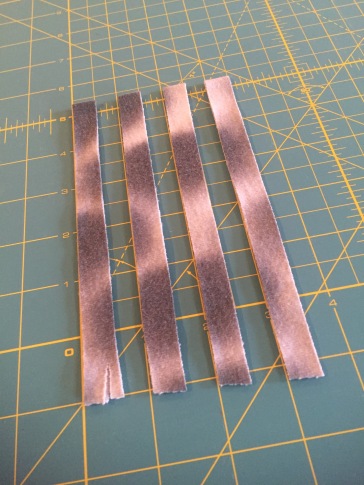 That’s how I learned it would be best to stitch with small parallel whipstitches down a whole line, and how I decided that putting in a basting stitch to keep my shapes down would be absolutely necessary

Then I just had to commit and do it.

The weather is finally warming up a bit this week so I am excited to get to wear this. 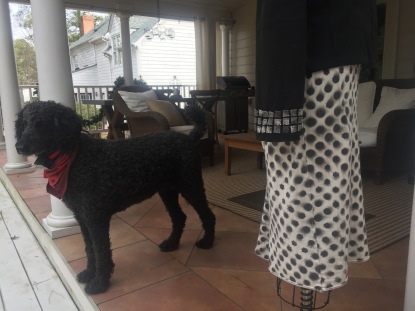 I have to have a picture with my pup in there 🙂

#2) The small dot scraps are both about 12″x32″ so I think they will be perfect for making a slim scarf. 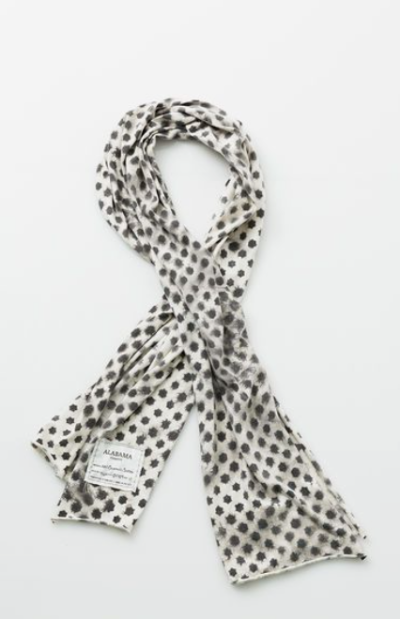 Alabama Chanin’s slim scarves are 12″X54″ but I think mine will only be able to be 9″ wide because the pattern doesn’t completely cover the scrap.  It will have to have a seam down the middle since my two pieces are only 32″ long but I don’t think I’ll mind. In fact, in a lot of Alabama Chanin’s garments the seams are a big part of the design. I will stick with the 54″ length, so each 32″ will be cut down to 27 1/4″. Besides, as we’ve learned, there is a lot you can do with those extra 5 inches.

#3) Here’s where I’m not totally sure yet, but I know I want to make some type of shirt with the rest of the medium dot fabric.

Again, I went back to the Revolution collection and the Studio Style book for inspiration and I found the circle spiral technique. Here’s a nice little blog write up with pictures and directions.

If you read my last blog post, you know that I had just used the technique on a sample swatch and found I liked it much more than I thought I would.  This technique will be the perfect way to use up the rest of the odd shaped medium dot scrap. I’m thinking a fitted top in black and I’m thinking putting the spirals all over.  The two projects where Natalie highlights the Circle Spiral Appliqué technique in Studio Style do not do an all-over placement but have the spirals placed at the edge or the bottom.

If I work it just right, maybe I will have enough of the faded fabric to also make the Spiral Appliqué & Beaded Camisole Dress featured in the book.  It looks like she used two different colored spirals on that dress which would stretch my fabric even more. Maybe a white dress with faded and black spirals? I wish Alabama Chanin still sold the dark gray fabric.

If any of you have worked with one of Alabama Chanin’s scrap bundles, or have a favorite use for faded fabric, I would love to hear how you used it.

One thought on “How I Used My Faded Fabric Bundle”

Oh hello you. This guy was huge when he took off!
It’s not easy taking care of an aging parent but at least I have my sisters staircase to climb every morning and help motivate me
Just because
Just in case you were wondering where I inherited my awkward sense of humor. Happy Father’s Day to all the dads out there and to everyone who may be missing theirs.
Turns out a do have Trillium up on the mountain. Not a field of them, just this lone guy.
Mother’s are the best!!