I am a big fan of creating garments from scratch (and so is my bank account), but the one thing that Alabama Chanin does much better than me is stencil placement.  I’ve created several garments from TSOM’s DIY kits and I have to say that every time the stencil placement is perfect. They must have a system – I envision templates that show each pattern and then where they place each stencil on each pattern. This is one of those questions that is on my long list to ask if when I get myself back down to Florence.

I’ve had a couple of mishaps lately and I want to share them with you so hopefully you can avoid the same, and so I won’t make the same mistake twice. Who are we kidding, each of my garments has a little mistake it in somewhere and that’s what makes it so unique to me. That said it would be nice to minimize those mistakes.

When you go through the planning process for each garment there are so many decisions to make; pattern, color (top and bottom layers), stencil (all over, random, placed), paint color or not painted, thread, technique, embellishment, stitch type, it really can be overwhelming. The School of Making (TSOM) has tried to help us through this process with their project planning sheets. I grabbed this free resource from TSOM’s pattern page:

They do leave the last page blank for you to put your drawings or inspiration, and I’ve decided from now on, if I’m using a tricky stencil, I’m going to plot out in advance exactly where I need to place my stencils on a blank copy of the pattern.  On that same page of TSOM’s website there is a link to “garment descriptions” where I found this:

I’m thinking if I had planned better I wouldn’t have ended up with this: 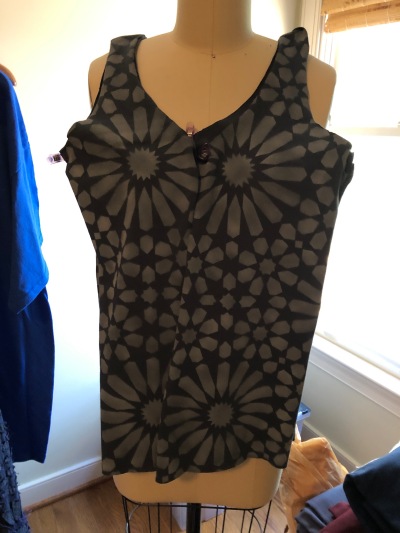 I feel like I owe you a little back story here. This winter I decided I wanted to try and make the underskirt and belt to recreate one of my all time favorite Alabama Chanin looks. 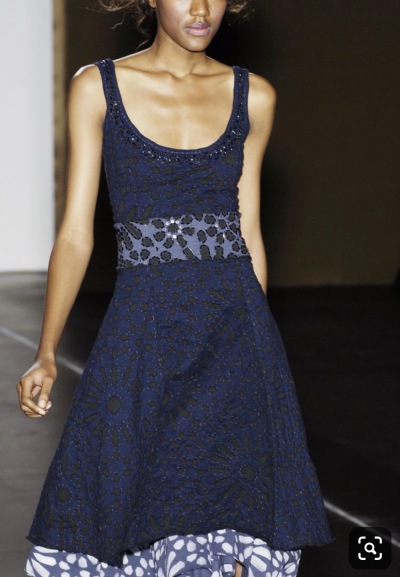 I loved the fact that the underskirt is not stitched so it would be a quick piece to work up. Thinking anything AC would be quick was my first mistake. I already have the navy camisole dress and it is a little longer in the back than the front so instead of just using a simple swing skirt, where all four panels are the same, I decided to make this a fitted skirt. It’s not quite as full around the bottom but that seemed less awkward then the length issue.

I also decided that I wanted to place the stencil only on the bottom, not allover. And here’s where I should remind you; I was trying to do this in February which for me means winter and airbrushing in my unheated garage. I didn’t get a lot of pictures of this process because I was just trying to hurry up and stay warm! I decided to cut out a curve of butcher paper and “mask off” all of the area from the waist to 21″ down the skirt. Sounds easy enough but somehow one of my panels ended up 23″ down so it wasn’t going to line up with the panel next to it.

So I spent quite a bit of time on this process and at the last minute thought, “I’ve got just enough fabric left over to cut out a top to go with this skirt.” By this time I was losing light as well as heat so I quickly cut the four top pieces and got to airbrushing.

I’m using the Facets stencil here and because it has the large flowers you really do need to be careful where the stencil lands on your breasts. When I made a tank shirt earlier I came up with the idea to make sure that the large flower landed in the center of the top:

I don’t really love this placement either, I’m more of a random type girl, but in my effort to make sure I didn’t have a flower on my boob I overthought it. Not the case with this latest top, I under thought it.

So, the picture below shows what I ended up with. I think what I’m going to do is cut out some of the fabric in the top pieces and use it as a top layer of a negative reverse treatment just around the neckline of a white layer underneath. I need to save this fabric somehow! Who knows, sometimes it these mistakes that lead to some of our most creative work – or at least that’s what I’m telling myself to not be upset about messing up my AC organic cotton. 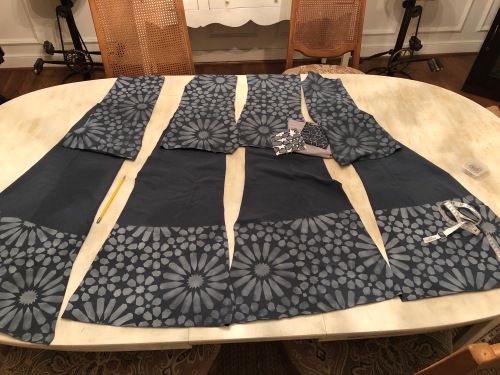 A couple other things I’ll point out in this photo:

I really do like the way the skirt turned out. 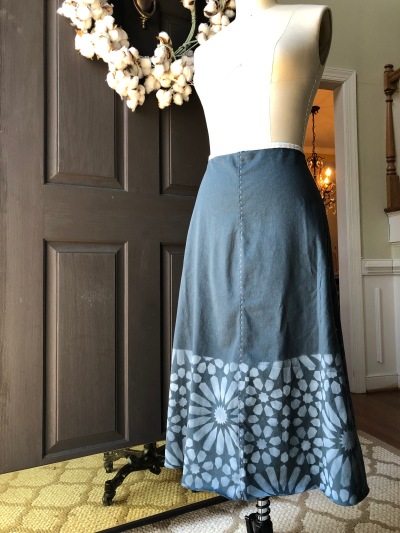 When I wear it underneath the dress you won’t even see my “fix.”

I had also thrown an extra piece of fabric under the stencil to create the belt – again – didn’t pay too much attention to the stencil placement. Sure enough, the big flowers landed on my hips. I don’t hate it though. It might have a slimming effect and if you look at the inspiration picture it looks similar.  I did put a question out to the Stitch-a-long FB group to ask what they thought about the size of the belt and I got about 50/50 too big and just right. 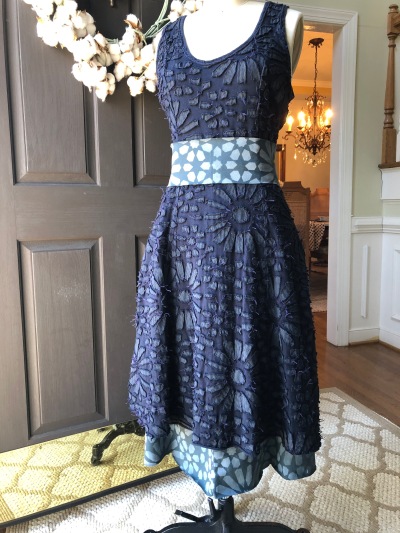 It’s currently 4″ wide. I think if I take about an inch off the top the shapes will actually coordinate better and it will probably be more flattering to my short self.

Honestly, I think Facets is one of the harder Alabama Chanin stencils to work with because it is so uniform and geometric. Some, like Anna’s Garden or Bloomers are almost foolproof – no matter where you place it on the garment it looks good.

Another stencil I’ve had some trouble with it Magdalena. When you purchase the stencil it is unique in that the size of the design changes over the length of the stencil. 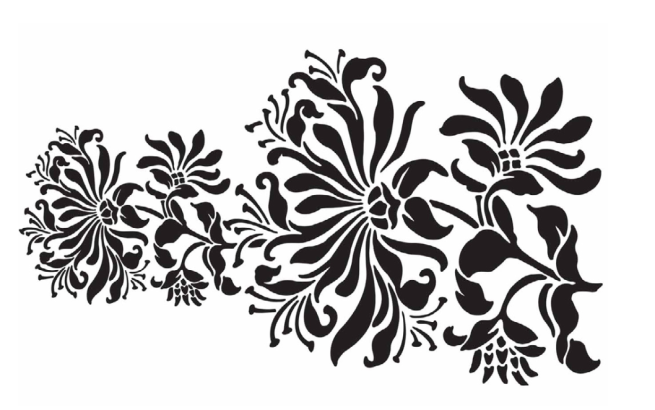 This one should always take a lot of thought. I think I did a good job on the little navy bolero I made where I decided to put the big flower smack dab in the middle of the back. 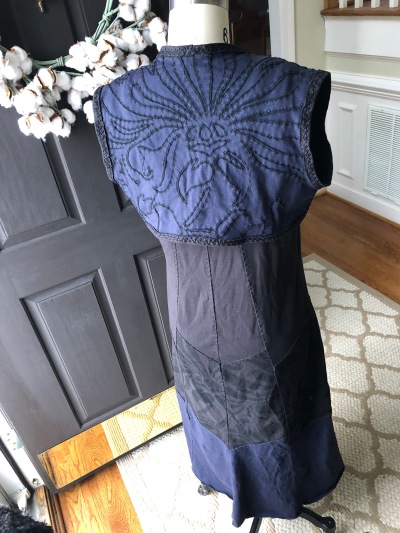 I wasn’t so successful when I made the knock off panel dress. It was another case of not paying enough attention of where the stencil hit and if you notice on the front right panel of the dress (you know, where it’s most obvious) there isn’t much stenciling on that pattern piece. It must have been at the edge of the stencil when I was airbrushing. It also just looks a little odd next to its flower next door. 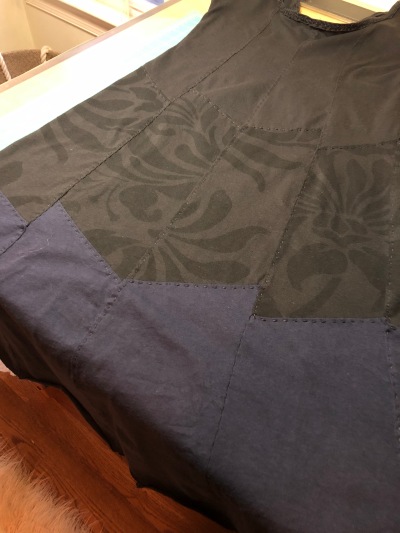 Thank goodness this piece isn’t stitched either because I think stitching would draw even more attention to it.

So, what have I learned? Don’t stencil in the middle of winter. No, just be more thoughtful in the planning process. I’m thinking about writing to The School of Making and suggesting they make an app where you can pick all your design elements (pattern, stencil, color, etc.) and the app puts it all together for you, shows you where to put the stencil and lets you make changes. In the meantime, I’m going to use the elements of the design worksheets and the images from their DIY custom Kit brochure and try and plot out where I want to place my stencils before I pull out the airbrush.

One last tip I thought I’d share: one of the stitchers from our amazing FB group said she bastes her garments together before she stencils to make sure her shapes match across seams. Brilliant. If you have any other tips, please share!

In the meantime, the irony is the next couple of projects on my to-make list don’t have any stenciling at all.

One thought on “The Art of Stencil Placement”

#memademay2020 day one. #theschoolofmaking poncho with a single layer swing skirt all hand stitched.
Had a lot of fun with this Easter activity. There were a lot more but my boys ate them up too fast! So thankful for a great way to shop local and support a good cause. And yes, there is a hint of the future in there. #aidynscaringcookies
Don’t know which made me happier yesterday. Sewing masks to donate to the local VA hospital or teaching my 18 year old how to use the sewing machine.
Forced Forsythia for the win!!
A pretty darn good start to 2020! I’m wishing all the best to you and yours in the new year!
Thank you @purerootsnutrition for the medicine making class. Elderberry syrup is going to make a great gift! #findmeinberniesknee