In the spirit of July, I started working on my flag quilt kit from Alabama Chanin.  It’s a little overwhelming, around 150 panels, but I’m hoping I can get some friends to help! 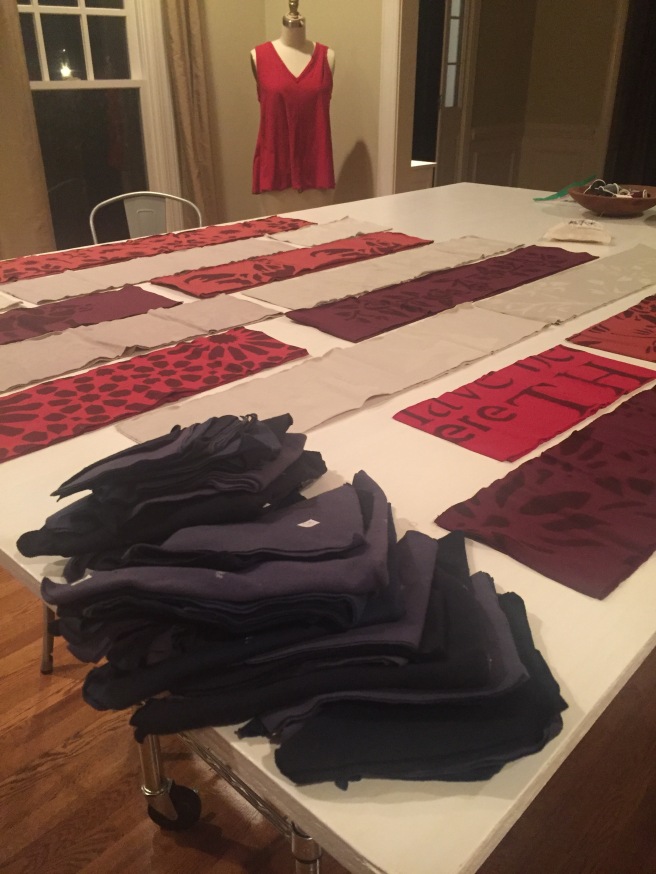 The first panel I decided to tackle was panel “ZZ” – a 5″ x 16″ strip of Apple fabric with the facets stencil painted on in Alabama Red paint.  If you need the paint recipe, you can find it here.  I’m doing all the panels on the flag in reverse appliqué.  I feel it would be best if they all have the same weight and thickness. 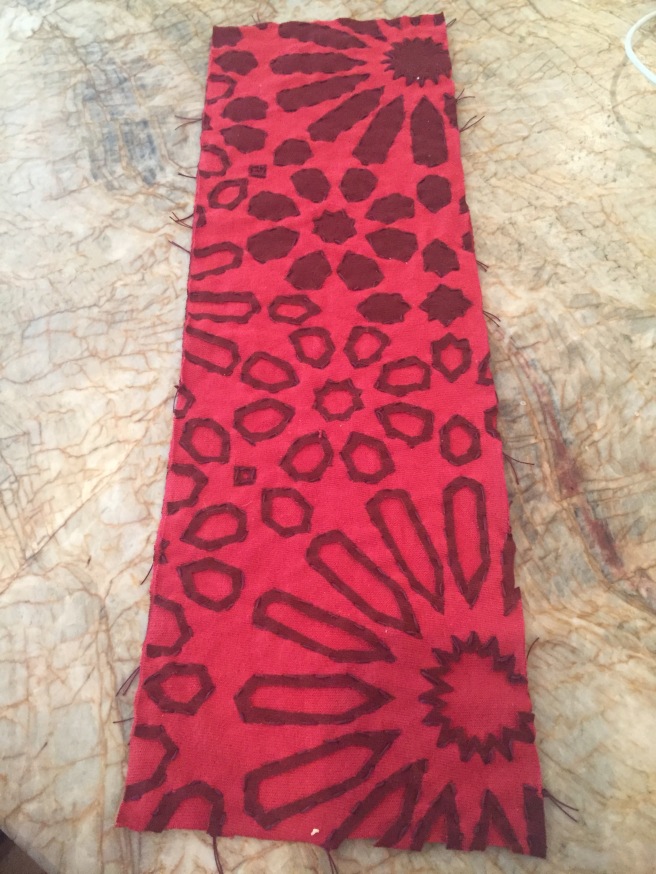 This was my second time working with the facets stencil and I have to say, “I love it!” Not just because it looks fantastic, but also because it is very meditative to stitch.  It has geometric shapes with a lot of repetition so there is less effort to make stitch lengths the same and once you get in a rhythm, you know exactly where and how to stitch.  Also, cutting it out is easier than most stenciled shapes as it is mostly straight lines.  This was the same for both the reverse appliqué and the negative reverse appliqué.

A few months back, I worked up a facets fitted dress in negative reverse appliqué from a DIY Kit I purchased at my Weekend Workshop last November.  While you are at the workshop, everything you purchase is 20% off and I thought this dress would look great under my polka dot walking cape that was my workshop project.

The fitted dress they had for us to try on at the Factory was worked up in negative reverse appliqué and it looked so good I decided to do the exact same, including the same color, tone-on-tone navy with navy thread.  Our Alabama Chanin guide, Rachel, was kind enough to have them cut me some pockets for me to add to the dress.  Thank you Rachel!!

As I mentioned earlier, the ease of the geometric pattern made it fairly quick work to embroider the six panels of the fitted dress and then came the assembly.  I had to go to Natalie’s book, Alabama Studio Sewing Patterns to read up on how to add the pockets.

Basically, after you’ve assembled the front and back panels.. 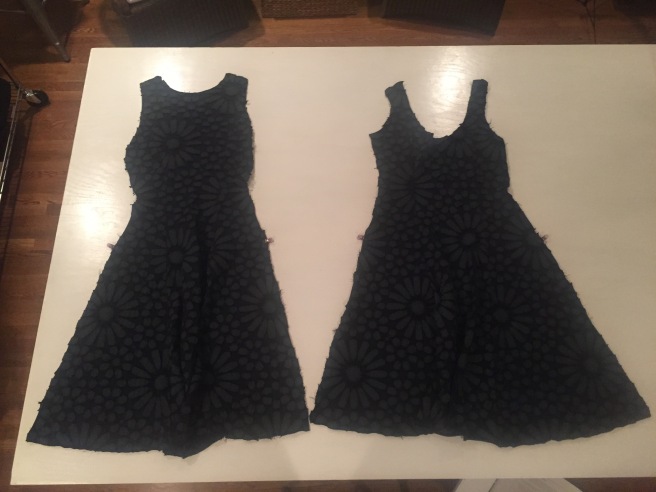 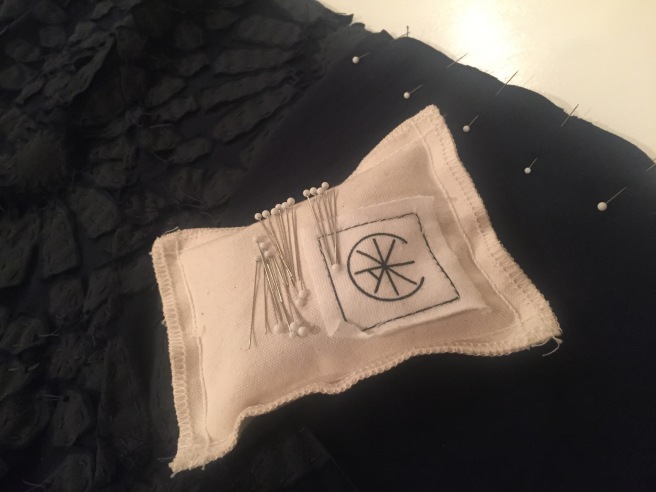 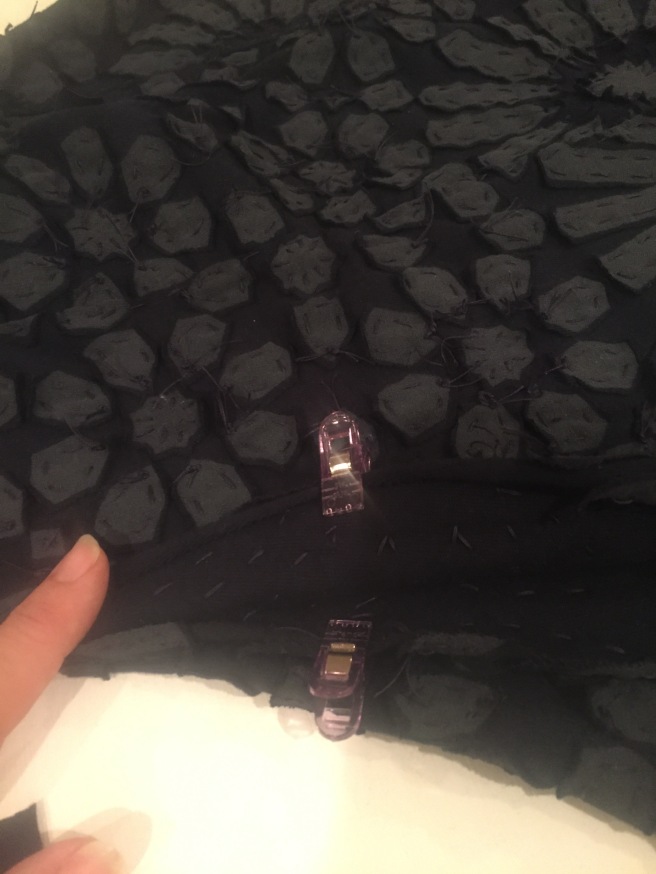 Pin the sides together and sew in one continuous line which includes the pockets. 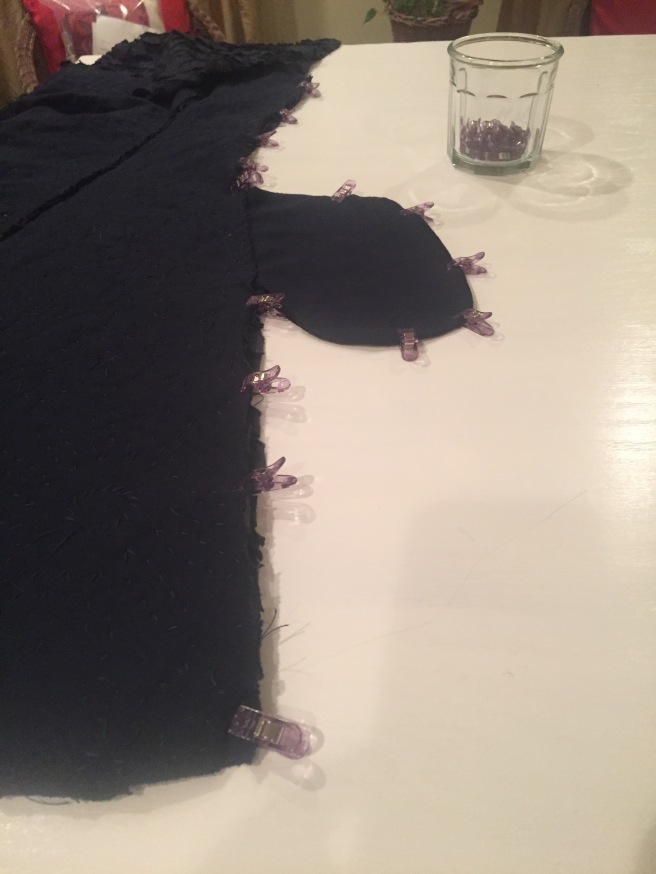 And don’t forget to reinforce pockets stress points by tacking them.

I’ve been enjoying wearing this dress a lot! 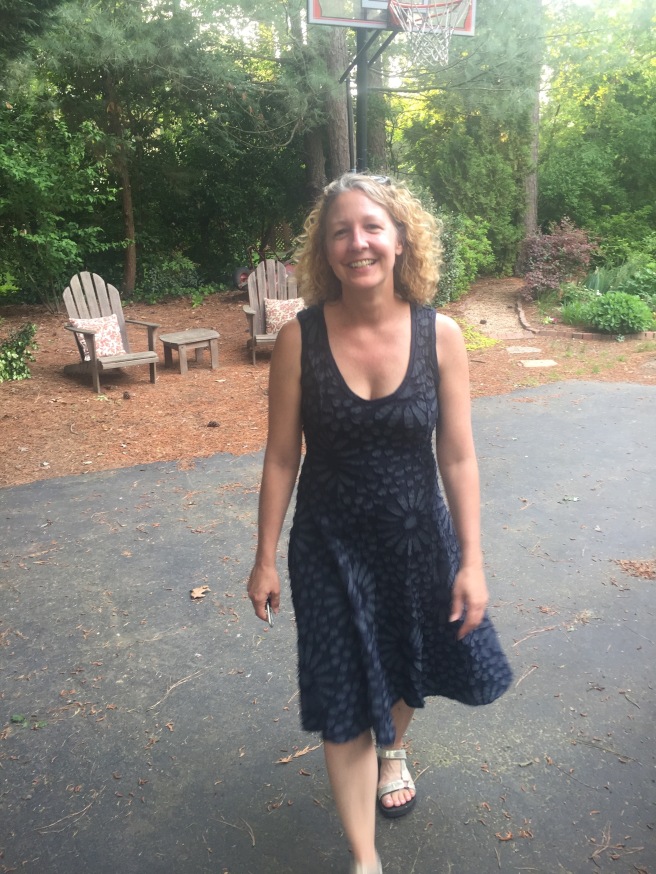 So …. I’ve decided to order the facets stencil.  Mostly because I’ve become so enamored with the flag quilt rectangle I’ve done.  But also because today on Alabama Chanin’s journal post, they showed their wrap tunic pattern worked up several ways.  I want to make a wrap tunic using the same color/technique as my flag rectangle because I think it would go great with some pieces I’ve already made.  Here’s a look at what I was looking at.

Funny how it can look so different in different lighting and with different backdrops.

Did you notice I didn’t cut out the one shape?  I wanted to do a little something so you know it’s mine 🙂

One thought on “Facets and Pockets”

Hello fellow stitchers. I’m Sue and I’m happy to be joining the #summerhandstitchalong I’ve been a huge fan of all things #alabamachanin and #theschoolofmaking for over 10 years now. I even started a little stitching studio in Richmond Virginia, Everyday Artisan. In this pic, I’m wearing my latest make, the cropped car coat with tartan stencil. Swipe to see the pattern better. This summer I’m stitching up a matching pencil skirt from an AC DIY kit.
I've got a new video up on my YouTube Channel - Everyday Artisan. An update on my Tartan stitching project on #nationaltartanday. So grateful for #theschoolofmaking for giving me the history. Check out their Instagram if you want the full story.
Stitching friends: Check out my YouTube channel to see how I’m going to rework this #projectalabama corset top I bought on eBay. I’m Everyday Artisan on YouTube
Another snow day on the mountain is giving me time to play with my stitching and I uploaded my second YouTube video. Check it out if you want to know the two things I do with a #theschoolofmaking DIY Kit before I start stitching
This one is for my stitching friends. I haven’t been very good at blogging my last few projects so I’m going to try something new in 2022. Vlogging. Head to my website linked in my bio to get the link to my YouTube video #theschoolofmaking
Not a bad place to golf